Home How Hackers Get Your Passwords and How To Defend Yourself

How Hackers Get Your Passwords and How To Defend Yourself

By Roger Grimes at KnowBe4

Despite the world’s best efforts to get everyone off passwords and onto something else (e.g., MFA, passwordless authentication, biometrics, zero trust, etc.) for decades, passwords have pervasively persisted. Today, nearly everyone has multiple forms of MFA for different applications and websites AND many,

The average person has somewhere between three to seven unique passwords that they share among over and services. Here are some related links to

And, unfortunately, those passwords often get stolen or guessed. This is why I recommend the following password policy guide: 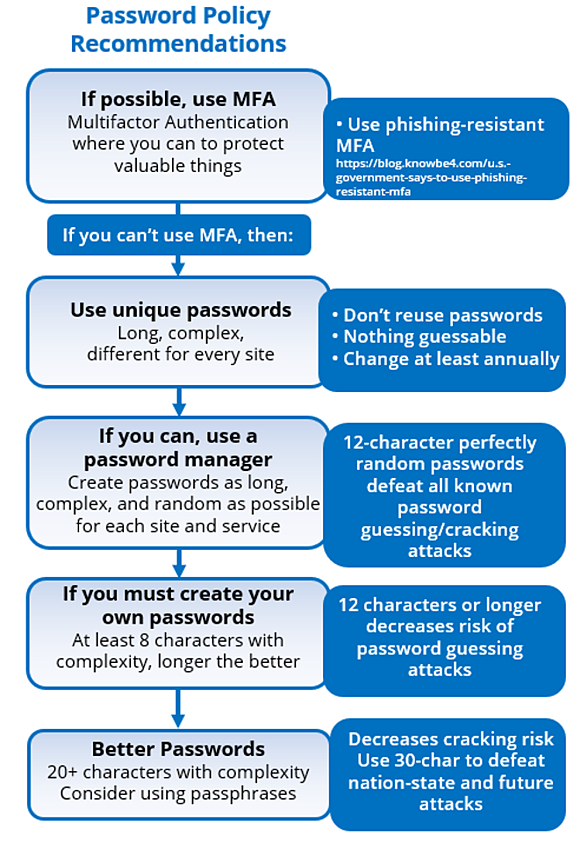 Most computer security experts agree with these policy recommendations, but more than a few readers might be shaking their heads, especially at the recommendations to use passwords/passphrases. Why in the world would anyone need a password to protect against password

Each will be expanded on below.

Theft of passwords is by far the most prolific type of password attack, usually by social engineering of some type, but it can also be due to malware and hacking tools. The most common theft method is a traditional phishing email where the sender is pretending to be some organization that the potential victim has a relationship with, which contains a message and link prompting the user to type in their real login name and password. Here is a common example pretending to be from Zoom telling me my Zoom service has The sender’s email address and the URL link I would have to click are clearly not from Zoom.com, as it would be if the email

Today, most malware looks for and attempts to steal as many passwords as it can. If the victim gets tricked into running malicious content, the malware will look in many areas to find and steal the user’s

If hackers can get access to the victim’s device or network, they will often run password-stealing utilities to extract or eavesdrop on passwords. Here is an example of a hacker tool known as Responder being used to capture a password hash transmitted by a victim viewing or clicking a malicious phishing email with an embedded secret link, which unbeknownst to the user, starts a The hacker gets the password hash from the surreptitious login session, which he then converts to a plaintext password below). If you are interested in learning more and seeing a demo of this sort of attack, see my article on the subject on

In general, many tens of millions of passwords are stolen, one way or another, from end users each year. Stolen passwords often end up in public or private file or database repositories, where they can be offered for sale or even queried for free

Passwords can also be guessed. All the attacker needs is an accessible login portal the victim can log into with a login name and password, and the ability to guess multiple times over a long period of time. Then, the attacker manually guesses or uses an automated password guessing tool. The shorter and simpler the password, the easier it is to guess. If the involved login portal does not have “rate throttling” or “account lockout”, an attacker can guess a dozen to thousands of times

Since most user’s passwords are less than long and not perfectly random, most of those types of passwords can be broken days to a few months. The average home user rarely changes their password, and most business passwords are only changed once every 90 to If an attacker can be given unfettered and unmonitored access to a login portal, they can often keep guessing until they

Another popular password attack is password hash cracking. In most modern-day operating systems, any typed in password is transformed by a cryptographic hash algorithm into a representative hash of the password hash). Here are some example password hashes of the word ‘frog’ using a handful of hash algorithms supported by popular

Password hash cracking is done externally to the user’s login system. The hacker does not need to be on the victim’s network, and rate throttling and account lockout cannot be implemented to slow down the guessing. Attackers with the appropriate password hash cracking hardware hash cracking rigs), can guess up to many tens of trillions of passwords per second. With that sort of speed, very few passwords below will be able to withstand

It is well-known that within the password hacking community, that “normal” human created passwords up to are routinely broken in attack scenarios in days to weeks. However, if the password is truly random, something like what a password manager program could create, then the perfectly random password needs to only be long to withstand all known password guessing and

Another common password attack is for a hacker to utilize a method which resets the user’s password or simply bypasses it altogether. Most popular large authentication systems allow users to self-reset their own passwords. These are needed because one of the most popular support calls is a user forgetting or needing to reset their password. Password calls to tech support are so common that if they were all handled by a human, it would require significantly more resources and money than the involved organization has to spend. So, many/most organizations create or enable a portal that the user can use to reset their password. Unfortunately, hackers know about these two and will use various tricks to reset the user’s password without the

How the hacker is able to do this varies by authentication system and self-help reset portal, but just know that millions of passwords are reset each year by attackers. The hacker then takes over the account account takeover), changes the user’s password again, and begins using the account in an unauthorized way. Many times, the user is unable to recover the account and it is lost to the

In summary, passwords are compromised by the many tens of millions each year, using password theft, guessing, hash cracking and unauthorized

The password attack defenses can be summarized by the following, in order

If you can use phishing-resistant multifactor authentication (MFA) instead of a password, try to do that. A hacker cannot steal, guess or bypass your password if you do not have one. It is key to use MFA whenever possible. Most MFA is easily bypassed by simple phishing attacks, which negates most of the reason for moving from passwords to MFA. For more information, read the

Unfortunately, most sites and services do not yet support MFA and users will continue to have to use login names and passwords across more sites and services than MFA can help with. The single best tactic a user can do to prevent password hacking MFA) is to prevent being socially engineered, however that is accomplished. It takes a good, combination of policies, technical defenses and education to best prevent

The second-best thing a user can do is to make sure they use different passwords for every site and service. This prevents one compromised password from more easily allowing additional compromises to other sites and services used by

In closing, password attacks are very common and one of the highest cybersecurity risks to any user and organization. Most password attacks happen because a user’s password is stolen or guessed. Users can follow a handful of defenses to significantly reduce the risk of being the victim to a successful password attack. Users who follow the password defense recommendations above are far less likely to be hacked because of their password;